Hello friends, Nokia has launched another new smartphone in the Indian market named Nokia 2.4. So today we will get to know about the specification review features of Nokia 2.4 and the price in India.

Talk about the design of this smartphone, the design is made quite spectacular. The back panel gets a ragged pattern with mate finishing. It has 2 cameras with 1 LED flash, fingerprint sensor below, and Nokia’s branding under the sensor is given.

And at the bottom, there is a micro USB port, a mic, and with speaker Giril. There are a power button and volume rocker on the top and 3.5mm audio jack and a mic on the top. And on the left side is a dedicated Google Google Assistant button. Nokia 2.4 will look good according to the look, the smartphone is light and not too much weight.

The Nokia 2.4 gets a 6.5-inch HD + display with a waterdrop notch display and a 20: 9 screen size. Along with this, when talking about its internals, MediaTek helio p22 chief set has been given in it.

Talking about storage, 3GB RAM and 64GB internal storage is given and a dedicated micro SD card slot is given in it. It has a battery of 4500mah but it has a charging speed of 5 volts, which is a bit frustrating. And it has a micro USB port for charging.

Micromax in note 1 specifications and reviews

Micromax in 1b features and specifications 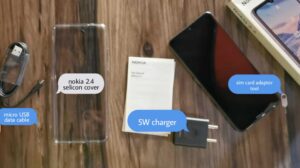 There is a lot of work in this smartphone in such a price range. But for those people who wanted to get a non-Chinese smartphone with the brand name, this Nokia 2.4  may prove to be right for them. Because the branding of Nokia is also very good and 2-year Android updates are also available and stock Android is available.

You will not be disappointed with Nokia, although you do not like a little camera, and according to the performance, you may feel that you are not enjoying playing the game. But overall usage buys will not disappoint with this smartphone.

Nokia 5.3 review and specifications and features

There are no reviews yet.

Be the first to review “Nokia 2.4 specification review features and price in India” Cancel reply